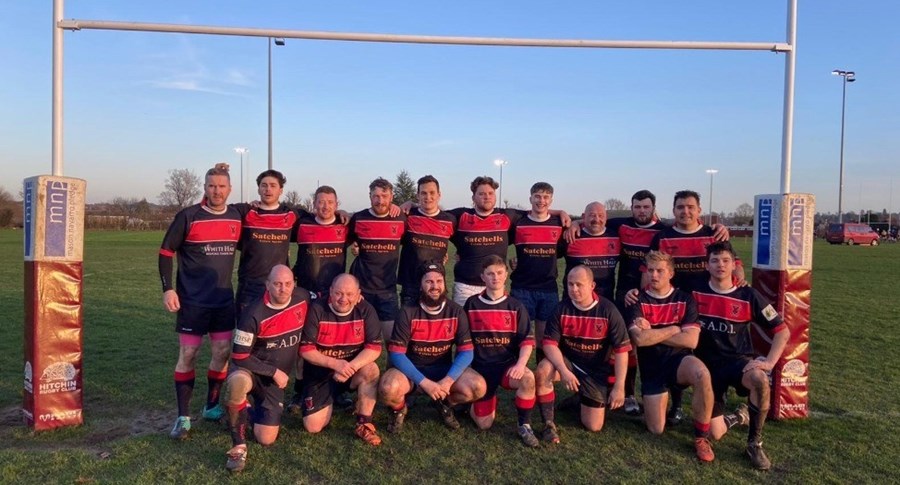 Biggleswade 3rds lined up against Hitchin in a friendly with plenty of local rivalry involved.

With some younger faces, some older ones, some players returning from long-term injuries and some just starting their rugby journey, the focus was on gametime rather than the result. That being said, Biggleswade stepped up to the plate against a big Hitchin squad with 10 subs.

Both teams started evenly, but after 10 minutes, Hitchin made the most of a gap in the line and scored the first try (unconverted). Soon after, they used one of their bigger forwards to smash through Biggleswade tackles to bring the score to 10-0. Biggy had to find some rhythm, and did so, with Elliot Tunstall planting a penalty from bang in front of the posts.

Next it was Callum Cochrane who used his pace to break through the line and bring the game to 10-8. Biggleswade were looking to get back into the match, but play began to get a little frayed and Hitchin scored two tries in quick succession to bring the half time score to 24-8. With a blood injury to their scrum half – Luke Hulson Brown – and tempers slightly short, Biggleswade ended the half with a lot to do.

After an inspiring team talk by club chairman Dave Tysom and new 3rd’s captain Tom Torne, Biggleswade came out with the bit between their teeth, getting to the ruck first and winning several turnovers. Unfortunately, Hitchin scored first after a sloppy lineout.

At 29-8, the game started to change. Biggleswade forced their way back into the match after a strong run and offload from Number 8 Pedro Rodriguez to Ben Wischhusen who passed out of the tackle to David Neale who forced his way over the line (converted).

On a Hitchin lineout on their 5m line, Tysom instructed Biggy not to contest and when the Hitchin forwards tried to form a maul, the penalty was given for blocking access to the ball. Wischhusen took a quick tap and offloaded right on the try line when tackled. The ball quickly moved through the hands of the backs and Tunstall scored.

Biggleswade, on the edge of one hell of an upset and now just one converted try behind, went hell for leather on the kick-off, but - having lost their influential Number 8 to a hamstring injury - they lost the ball from the restart and Hitchin broke away and scored in the corner.

Biggy just couldn’t get the ball back and Hitchin put the ball out from a lineout. Full time: a 34-22 home win.

Biggleswade can walk away with many positives and there is a lot of promise for the future with youth, experience and new talent playing in the same squad.