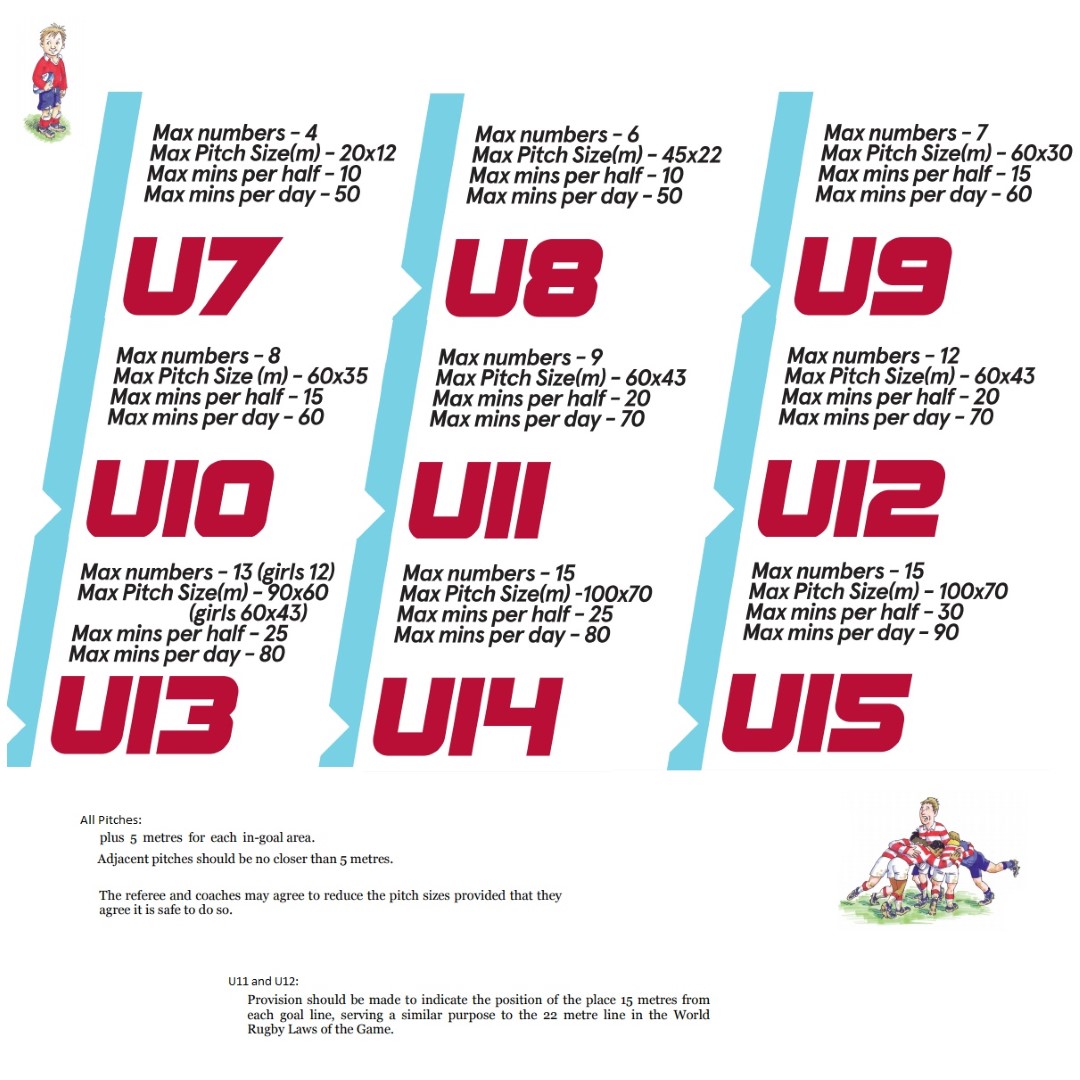 The object of the Game is that two teams of players, observing fair play, according to the Laws and in a sporting spirit should, by carrying, passing and grounding the ball, scores as many points as possible.

Rugby is played by men and women and by boys and girls world-wide. More than three million people aged from 6-60 regularly participate in the playing of the Game.

The wide variation of skills and physical requirements needed for the Game mean that there is an opportunity for individuals of every shape, size and ability to participate at all levels.

Training starts at 10 am and runs until 12 when you will all be able to get some refreshments at the clubhouse.

Law 5 – Each player must clean their own boots!

Any help from parents would be greatly welcomed and would enable your children to enjoy their rugby. We will have a number of jobs/roles that would enable us to provide your child with the best possible training and games

In line with the RFU, we aims to ensure that all people irrespective of their age, gender, ability, race, religion, ethnic origin, creed, colour, nationality, social status or sexual orientation have a genuine and equal opportunity to participate in the game of Rugby Union at all levels and in all roles. To ensure that this can happen in as favourable environment as possible the Club has developed the following Codes of Conduct which are intended as guidance as to how the Club expects its members and volunteers to behave towards each other in the various roles that they might have. The Codes of Conduct cover the following roles within the Club:

Full details of our code of conduct can be produced on request but this will include the following:

Biggleswade encourages parents and guardians to:

· Share concerns, if they have them, with Club officials.
· Support coaches in installing these values.
· Remember that young people play rugby for their own enjoyment not that of their parents.
· Always support the Club in its efforts to eradicate loud, coarse and abusive behaviour from the game.
· Remember young people learn much by example.

· Remember children play sport primarily for their own enjoyment, not for that of spectators.
· Acknowledge good individual and team performance from all players irrespective of the team in which they play.
· Acknowledge effort and good performance rather than ‘to win at all costs’.

Coaches of players should:

· Recognise the importance of fun and enjoyment when coaching players.
· Understand that most learning is achieved through doing.
· Appreciate the needs of the players before the needs of the sport.
· Be a positive role model – think what this implies.
· Keep winning and losing in perspective – encourage players to behave with dignity in all circumstances.
· Respect all referees and the decisions they make, even if they appear to make a mistake, (remember it could be you refereeing next week) and ensure that the players recognise that they must do the same.
· Avoid the overplaying of the best players by using a squad system which gives everybody a satisfactory and equal amount of playing time.

· Recognise the importance of fun and enjoyment when officiating players.
· Be a positive role model. Set an example, and as such, comments should be positive and supportive.
· Recognise that the safety of players is paramount.
· Explain decisions – all players are still learning and parents will understand the game better.
· Show empathy for the age and ability of players.
· Officiate to the rules laid down in the Rugby Continuum and keep themselves updated on rule changes.

Biggleswade players are encouraged to:

· Understand that if an individual or group of players feel they are not being treated in a manner that is acceptable, then they should tell an adult either at the Club or outside of the game.
· Play because they want to do so, not to please coaches or parents.
· Remember that skill development, fun and enjoyment are the most important parts of the game.
· Be attentive at all training and coaching sessions.
· Be a sportsman – win with dignity, lose with grace.
· Play to the IRB Laws of the Game and accept, without question, all referees’ decision even if they appear to make a mistake.
· Treat all players, as they would like to be treated themselves. Do not interfere with, bully or take advantage of any player.

There has never been a better time to introduce your child to rugby. Kids First Rugby is a new approach to the way mini rugby is played at rugby clubs across England. It is a programme of coaching and playing that puts the child at the centre and moves on at the child’s own pace and development, enabling more children to experience success.

The new rules for playing rugby under the Kids First Rugby approach are now mandatory at all rugby clubs in England at Under 7s, Under 8s and Under 9s age groups. New rules for U10s, U11s and U12s are also currently being trialled.

Rugby for your child is safe, teaches them terrific life skills and values, and above all is great fun. You can find out more by visiting www.englandrugby.co.uk