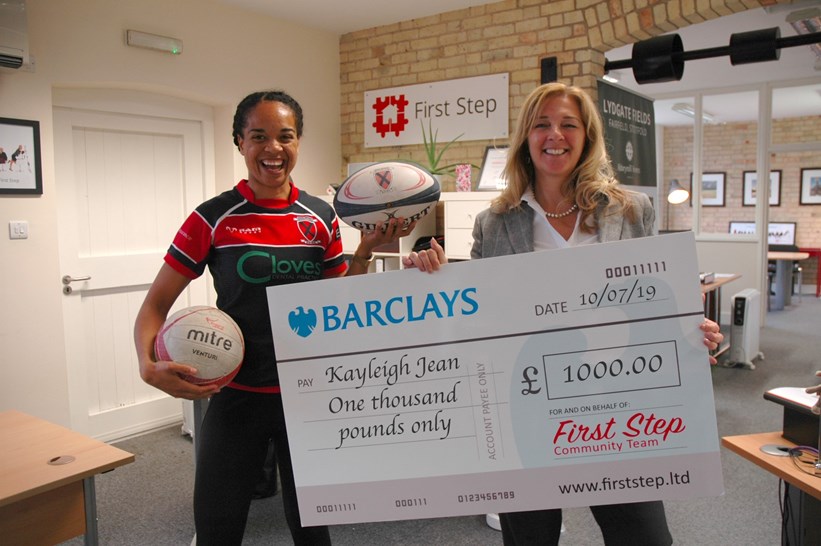 Biggleswade Ladies rugby player Kayleigh Jean is hoping to be a World Cup winner - but with a different-shaped ball.

Kayleigh, who joined Biggleswade Ladies last year, is travelling to South Africa in August to play for England at the Indoor Netball World Cup.

Her rugby teammates will be cheering her on, watching the matches as they are live-streamed on social media.

And, thanks to the generosity of Biggleswade Rugby Club members and First Step estate agents, Kayleigh now has sponsorship money which will make it possible for her to take part.

Indoor netball, or 'Nets', is a fast and furious version of the game, where players can use the nets around the court to assist in passes.

Kayleigh, aged 32, has played nets for six years, and has shown huge dedication training whilst holding down a full time job as Community Safety Officer for Bedfordshire Fire Service.

At the same time, she's played rugby for the Biggleswade Ladies team - sometimes driving straight from a nets game in the morning to a rugby match in the afternoon. In her first rugby season, she also played for the East Midlands Ladies county side.

Kayleigh has to raise the money to fund her Nets World Cup adventure herself, and Biggleswade Rugby Club decided to help. "We wanted to give something back to Kayleigh as she's shown such commitment to our team. Thanks to the generosity of club members we were able to raise £500 from two extra auction items at our summer ball to put towards her Wolrd Cup fund," said Biggleswade RUFC Vice Chair Teri Taylor.

Leading Bedfordshire and Hertfordshire estate agents First Step, based in Arlesey, then stepped up to donate £1,000. First Step Partner Jules Harwood, herself a former netball player for many years with Biggleswade Netball Club, said: "As soon as I heard Kayleigh would be representing her country I knew it was something we'd love to support," said Jules. "It's great to be able to help her achieve her sporting dreams."

"I'm incredibly grateful to First Step and the rugby club for taking the pressure off me and my family and allowing me to concentrate on training," said Kayleigh. "I hope to make everyone proud and come back a winner!"