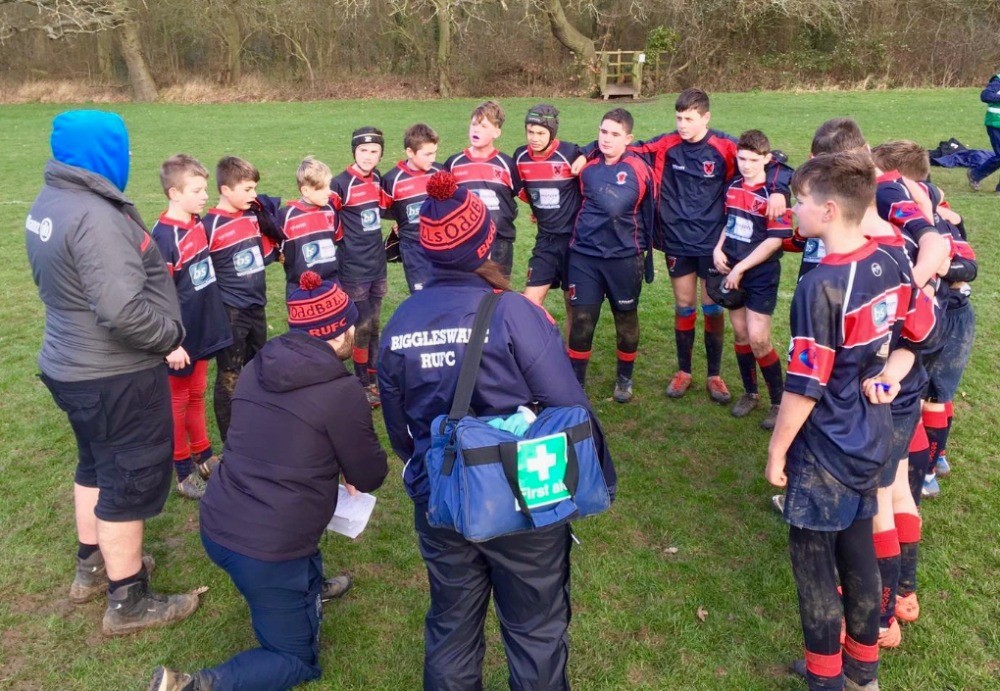 Biggleswade travelled to Bedford this weekend on a windy morning at Bedford Junior Blues’ ground for their first friendly fixture in 2020 sporting their new kit sponsored by BS Motors, Supreme Screens and KRB.

The Under 13s had been training hard the previous week on working off the Christmas chocolate but also on their aggression in contact, particularly in the ruck. Captain Fin Taylor led the way with calls of “ICE!” and “FIRE!” that could be heard across Bedford. His team responded by putting pressure on the opposition with their hard hits and low body position in the rucks.

It was Bedford who scored first however, despite good tackling from Biggy. Strong straight running and support lines allowed the home side to make ground into the 22 and offload the ball in contact to make the try line despite the efforts of Dylan, Henry E and Spencer.

Bedford showed the value of passing the ball down the line and tracking across to win the resulting ruck when they stretched the Biggleswade defence pulled off a switch move and scored again down their right-hand side.

Biggy did gain confidence from some excellent phase play – Ashton made a break and the move was taken forward by Donncha, then Logan took Biggy into the opposition 22 for the first time. It was unfortunate then that Bedford managed to get possession of the ball and score a breakaway try in the corner.

From the re-start Biggy took the ball into contact and won quick, clean ball – perfect for scrum-half, Spencer. He fired the ball out to U13s intercept specialist, Donncha, who saw the danger from the fast approaching defence and sold a dummy pass before putting Aaron through a gap. From the next phase, Ashton took a big hit from his opposite number and was thrown to the floor like a rag doll! To his great credit however he got back up and put in an even bigger bone-crunching tackle on the same player at the next phase of play.

More good tackling from Dylan and Donncha kept the Blues penned in their own half. When they did eventually make ground, some missed tackles and an intercept allowed them over the line for a further 4 tries in the first half. Half-time: 7-0.

As has been the case for much of this season, Biggy U13s seemed to wake up in the second half. Front rowers Harry and Henry B carried the ball with pace and power and were supported their forward pack by winning the ball at the breakdown. Josh Curson continued to lead his team’s defensive effort and chased down a breakaway runner to stop a certain try. From the resulting penalty for not releasing, Josh was first there yet again to make the tackle, supported by Man of the Match Ashton who forced the ball out of his opponents’ hands. A loose kick from Biggy did nothing to relieve the pressure and was gathered by the Blues backs in plenty of space to cross the line for another home try.

Biggy needed a spark of inspiration and this came from the right-wing Aaron Crawley after making a covering run all the way across the pitch to the left. Ollie and Thomas combined to make the tackle then Alfie pounced on loose ball in his own 22 and passed in-field to Aaron, who took an outside arc around the defence. Biggy forwards, Duncan, Logan and Ashton chased hard in support but Aaron showed great speed and determination to get past four would-be tacklers, score the try and collapse in a heap over the try-line!

Biggy went on to score two further tries – Ollie, now at full back, caught a clearance kick and put Biggy on the front foot with a jinking run. Josh picked up at the back of the ruck, passed to Logan in space who ran hard into the defender before offloading to Dylan who showed a neat side-step to evade the last defender and score.

More great work from the forwards won quick ball for the backs and Alfie burst through only to be stopped short of the line. Jack showed great aggression in the ruck which allowed Spencer to snipe around the edges of the breakdown but again the move was stopped short. Biggy pressure would eventually pay off after the referee gave a penalty for off-side and Spencer took the quick penalty, sold a dummy and darted in for the try.

Bedford did score again before the final whistle but the Biggy players can be proud of their efforts in the ruck in particular. This was an improved performance from the previous game and if this improvement continues then their first win since October cannot be far away in the Bedfordshire DPP Festival next weekend.

Grafter of the Match: Henry Elwood.