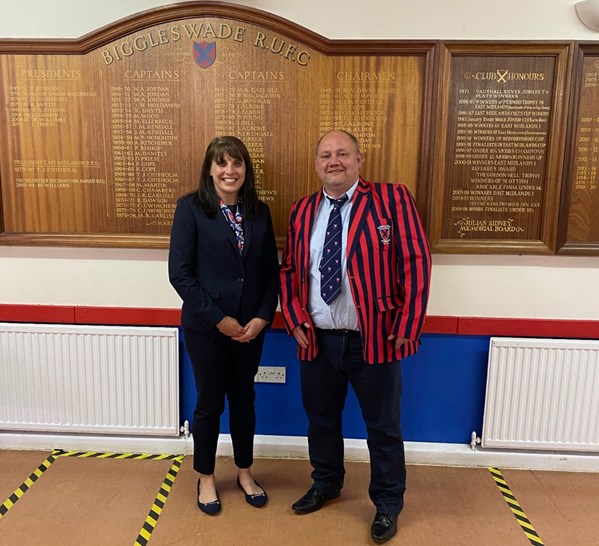 Teri is a long-standing member and player at the club (the only female player to have played in both eras when the club has had a ladies’ side) and steps up from her previous role as Vice Chair, where she has put in a tremendous amount of hard work in recent years.

“It’s an honour and a privilege to be elected as Chair of our fantastic club - it’s a little bit of history being the first female in this role, and it just goes to show the brilliant ethos here of us all being ‘One Club’. From minis, youth, girls, Colts, ladies and mens teams, across the board, we have weathered some tough times, but are looking forward to the future together. The club spirit is really strong especially now we’re back doing what we love the most - playing rugby. There’s a lot of work to be done and improvements to be made, but we will do it together,” she said.

Club members paid tribute to the outgoing Chair, Dave Tysom, and thanked him for putting his heart and soul into the club he loves for the past four years, building a strong base for the future.

He will now take on the role of Club President, taking over from John Thoday, who retired from the position. John has been another loyal and passionate stalwart of Biggy RUFC, devoting an enormous amount of time and effort into the club.

Thanks to Bradley Green, the other candidate for Chair, another loyal member, player and also a youth coach at the club, and who put forward an impressive manifesto. He will be joining the committee, where his passion, ideas and input will be a welcome addition.

The club would like to take this opportunity to remind members that the club is for ALL members, and their engagement in how its run is always welcome. So if there is something you would like to see adopted, changed, or improved upon, get involved, and consider joining the committee or attending a meeting to let the club know what you think.

The full list of committee members and minutes of the meeting will be published when available.