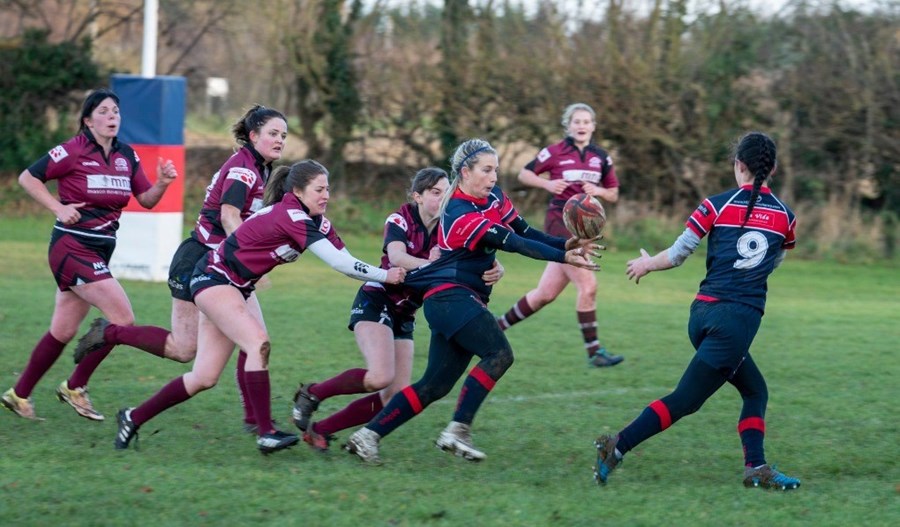 Biggleswade Ladies lost their fourth round Junior Cup match against Hitchin Ladies on Sunday afternoon in a real game of two halves.

Biggy were switched on and committed from the start. Both sides were finding it hard to break through eachother’s gain lines, with the first 10 minutes spent battling for ground between the 22s.

Biggleswade were tackling hard and low and playing with real confidence. It looked like they had broken the stalemate when after several phases Heidi Lawson charged from 30 metres to the Hitchin try line with her teammates piling in behind her, only to see the ball held up in the in-goal area.

Biggy were galvanised by the inroads they were making into Hitchin territory. Amanda Humphrey collected a clearance kick and made one of her trademark leggy carries, absolutely skittling over one would-be tackler before being dragged down by two more. For the next 10 minutes Biggleswade were camped in Hitchin’s half, forcing the visitors to concede several penalties, one of which was given (and a yellow-card dealt out)  for a high tackle on Heidi which poleaxed her just before the try line. Captain Charlie Field went for the posts, just missing, but from the next play Biggy almost scored when Carly Wilson made a great break at pace down the left wing. Following a quick tap and go penalty Biggleswade were frustated again when Amy Schiller was held up over the line.

Hitchin began to gain ground with some momentum of their own, as Biggy conceded a few soft penalties. Just before the half hour mark, their pressure told with their No 12 making their first telling line break to score an unconverted try. It was a blow after Biggleswade had so narrowly missed out on several scores, but Biggy responded perfectly, with Steph Cooper fiercely winning good turnover ball. The home team took a penalty tap and go, Field fed the ball out to Lauren Poole, who broke the line with a marauding run and passed back inside to the chasing Amanda, who offloaded to winger Chloe White. She ran it in under the posts to finish off a great try created by pace, power and excellent support running. Charlie converted to make the score 7-5.

The lead changed hands again with Hitchin responding with a second try out wide following a period of good pressure (try unconverted).

But Biggy were to chalk up the last points of the first half, when they turned the ball over on their own line, put together some solid forward pod work and released the backs to see Lauren spot a gap, tear 80 metres up the pitch and score a superb try. The successful conversion meant Biggleswade finished the 40 four points ahead.

It was a great first half, especially with Biggy forced to switch players round and cope with several injuries. The second period was always going to be tough against Hitchin’s bigger squad made up of players from their 1sts and 2nds, and Biggy running out of subs.

Hitchin started the second half well, winning a scrum against the head, and their No 8 sniping over the line with a strong pick and go, edging them into the lead. Good play from both sides saw the teams once more cancelling eachother out for the next few minutes, but it was the last 20 that led to disappointment for the Biggy team.

Their line press, which had so far made it hard for Hitchin to break through, simply wasn’t good enough and the visitors began to exploit the gaps when given too much time to pass. Biggy’s tackle height was also creeping up, meaning the defensive wall was now more easily breachable. Clinical work saw Hitchin score four tries, and in the end the 14-41 scoreline was a disheartening one for the home side, who felt they had given a better account of themselves than the score reflected.

Lots to work on in training when the team returns after the Christmas break, but the team cannot be faulted for their commitment and work rate and in particular their first half showing against a strong side.

Forward of the match was Steph Cooper (sponsored by The Shuttleworth Collection) for a great forward display with a big tackle count.

Back of the match was Amanda Humphrey (sponsored by White Haus Bespoke Timber) for another excellent all round game.