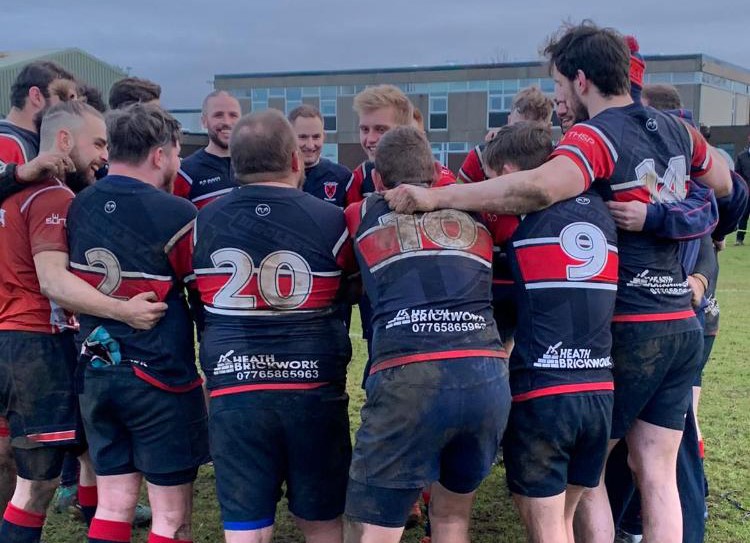 Biggleswade ended the first half of the season with a confident away win at Stamford, taking them to fourth in the league.

Biggleswade kicked off but were put under pressure after the referee judged Biggy’s back line offside. The home team cleared to half way and caught and drove their own lineout, winning another infringement decision. However, the determined Biggy pack took hold of the game and won great turnover ball to unleash Del Tribbeck. He crashed through the centre, allowing Gavin Taylor to kick clear and turn up the pressure, catching the Stamford back line offside.

Biggy drove a maul deep into Stamford’s half. A penalty clearance from the home team was caught and run back by Chris Simons, only to be stopped 10 metres out.  Wave after wave of Biggy attack could only be held out for so long and it was Taylor who crashed over for the first try of the afternoon.

Biggy forwards won a turn over from the restart. The Biggy lineout was proving strong, with Jake Devereux stealing a Stamford throw.  Stamford’s number 10 was using his strong forwards to crash up the middle of the field but Biggleswade’s quick-off-the-mark defence was working as a unit and putting in some fierce tackes to stop Stamford’s attacks. The home side did however open their account with a penalty kick from just outside the 22.

Biggleswade began to capitalise on Stamford’s mistakes and used their powerful scrums to move up the field.  A penalty 10 metres out gave Liam Panton the chance to crash over the line with the support of the Biggy pack.

A yellow card for dissent saw a Stamford player sin-binned for ten minutes, but home side pressure meant Biggy were unable to exploit the advantage. Another huge tackle from Tribbeck halted the Stamford attack and Biggy put together some excellent defence to win turn over to kick the ball out and end the half 3 - 10.

After the break, Biggy went on the attack with their pack smashing their way up the pitch. Some great passing and offloads got the ball to Tom Anderson who was stopped just short of the try line.

Once more, Biggy collected Stamford lineout ball, with Luke Dillinger presenting well and giving a good platform for the back line to pass wide to Jakub Grabowski on the wing. A Biggleswade lineout just inside the Stamford 22 led to another well-executed rolling maul, and a break away from Kyle Loan brought Biggy’s third try of the day.

Another mistake from the Stamford forwards saw Arron Pickering pick up the ball and make a 40 metre charge. Again, good line-out and mauling allowed Biggleswade to advance, and hard work from the pack set up Taylor to score Biggleswade’s fourth (and bonus point) try.

Biggy’s confidence was high and they attempted to run from their own 22 when they caught the restart, but a forward pass gave Stamford a scrum 15 metres out.  Biggy forwards won the scrum against the head to allow Taylor to clear.

Stamford came back strong in the last 10 minutes and applied pressure but the Biggy boys held out. As the clock ticked down Stamford eventually earned a well-deserved try, making the final score 8-25.